This functionality is only available to users on Enterprise plans. Support for Hosted Organizations is coming soon.

If you want to collaborate on a project with other team members, groups are a great feature to use. A group in Saturn Cloud is a set of users that have shared ownership of:

Adding your fellow teammates to a group will enable you to share these with them. This is useful for both allowing users in the group to have access to objects like images for using on their own personal resources, and to have multiple collaborators be able to edit objects like resources. For example, let’s say, client has deployed a machine learning model as a service. Now if this deployment is owned by a single Saturn Cloud user it can be risky for the organization. If the employee goes on a vacation or quits their job, no one would be able to edit that running deployment. Instead with groups, any person in the group could edit the running deployment. For all these scenarios and more, multiple ownership ensures business is not dependent on a single person.

Note: when a user is in a group they still have the ability to own/edit their own resources, images, and secrets. Group-owned objects will show up in the UI alongside user-owned ones.

Login to Saturn Cloud as an admin. On the sidebar click, Users & Groups then scroll down to Groups.

As an admin you can see all the groups that have been created so far.

Click New to create a new group. This opens a new page where you enter name of your group. Click create.

Once a group is created, you can add users for the group and group git ssh keys as shown below. The git ssh keys are used by the group-owned resources to connect to git repositories. Now all group members are set to work in collaboration. 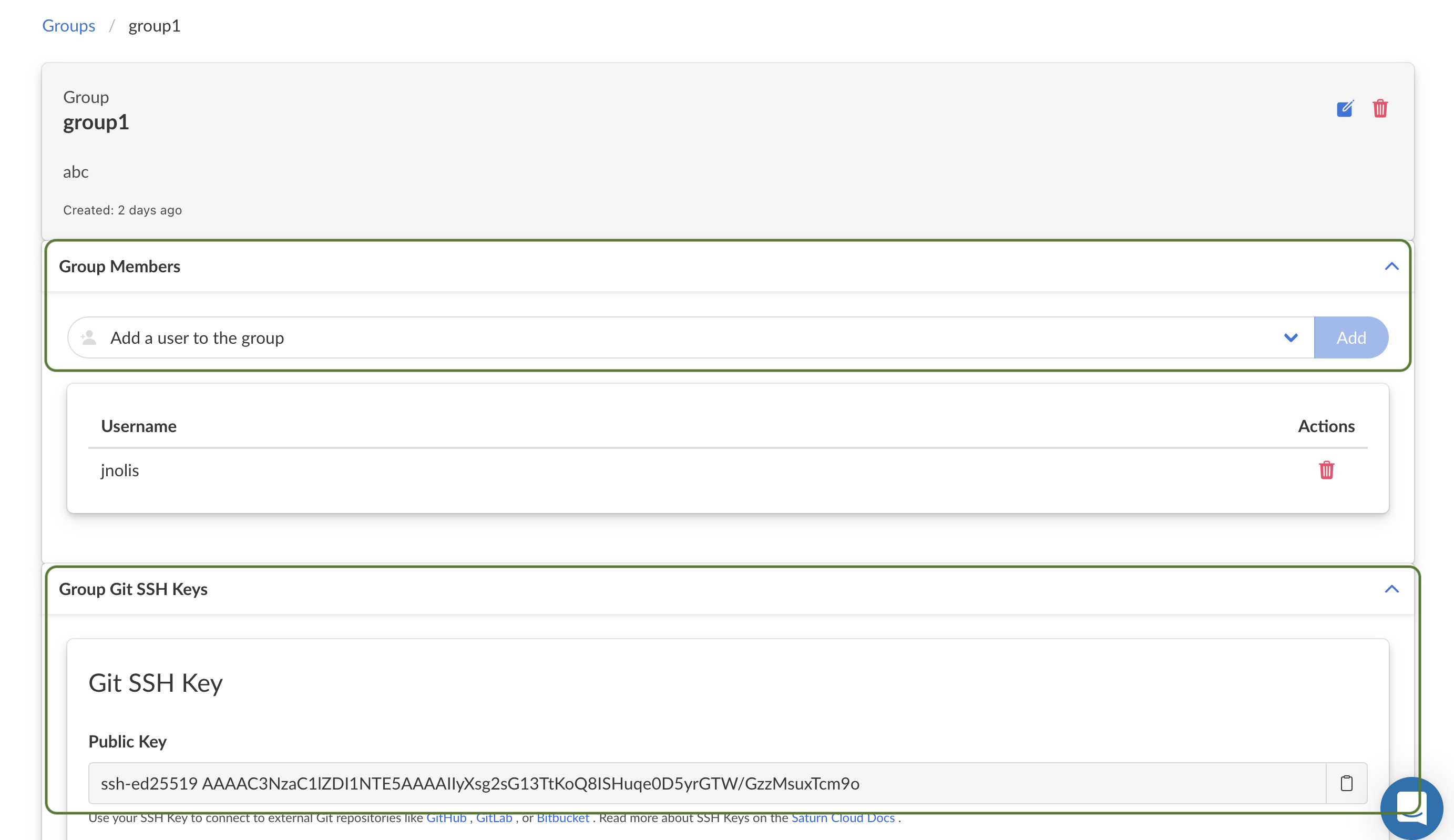 Once you have created a group inside Saturn Cloud, the group is able to own:

Resources like deployments, jobs, Jupyter servers can be owned by a group to have have multiple collaborators. This reduces dependability of a resource on a single owner. To create a group resource, open a new resource and select a group from ‘Owner’ field dropdown as shown below. This cannot be changed once the resource is created.

Just like user secrets, group secrets can also be created. Group secrets can be used by any member of the group. Select Secrets from sidebar and click ‘new’. On this page, under field Owner select the group name you want to create secrets for.

These are the permissions that are granted to admins vs other users.

These are the permissions comparing how groups own items compared to how users interacted with those items.