This article discusses the Saturn Cloud built-in git functionality. If you so choose you could alternatively set up git yourself by having a resource startup script clone a git repo, or by manually using the terminal within an Jupyter or RStudio server to do so. The Saturn Cloud built-in functionality has a number of conveniences and no drawbacks compared to manually setting up git yourself, so we recommend you try it.

Saturn Cloud supports using SSH keys as a protocol to connect to git repositories, which requires a public key and private key pair shared with Saturn Cloud and your git host. So the first step is setting up the right keys. Thankfully, Saturn Cloud will automatically generate a public/private key pair for you by default, but you can change it as needed.

From the dropdown User menu at the top left, select Manage [username]. This is a secure storage location, and it will not be available to the public or other users without your consent. 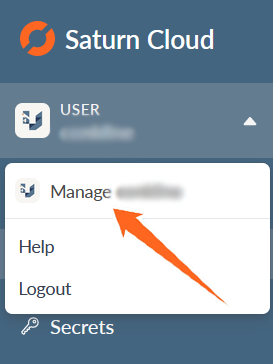 Under Access Keys, find the section called Git SSH Key. Click on Create an SSH Key, and you will be taken to the SSH key creation form.

Here, you can generate a public/private key pair within Saturn Cloud or upload your own:

After you have a key pair, copy the SSH public key and add it to your git Host to create the secure connection. Refer to your git host for how to do this (for example, here are the directions for GitHub). 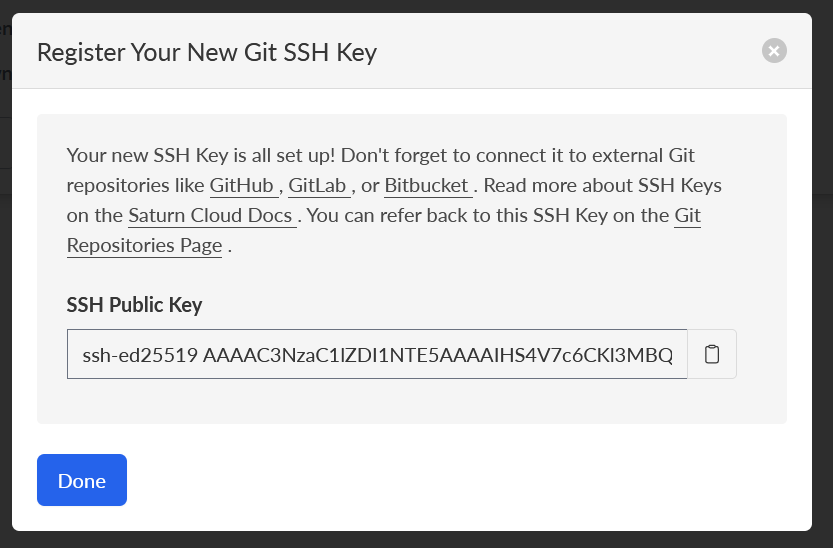 There are several adjustments you can make for the SSH key:

Once you’ve set up your SSH keys, you can add git repositories to your resources. From the left-hand menu, select the Git Repositories tab. 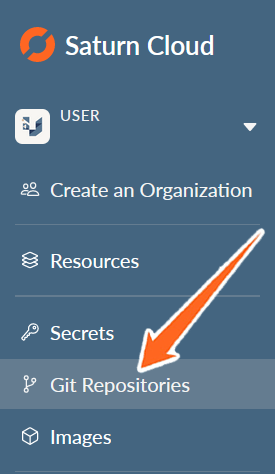 From the git repositories page, select the New button at the top right corner. Here, you can add a repository via remote URL (this is the link you’d use when running git clone in the terminal).

Once the repository is added, you can adjust several properties from the edit menu under Actions. 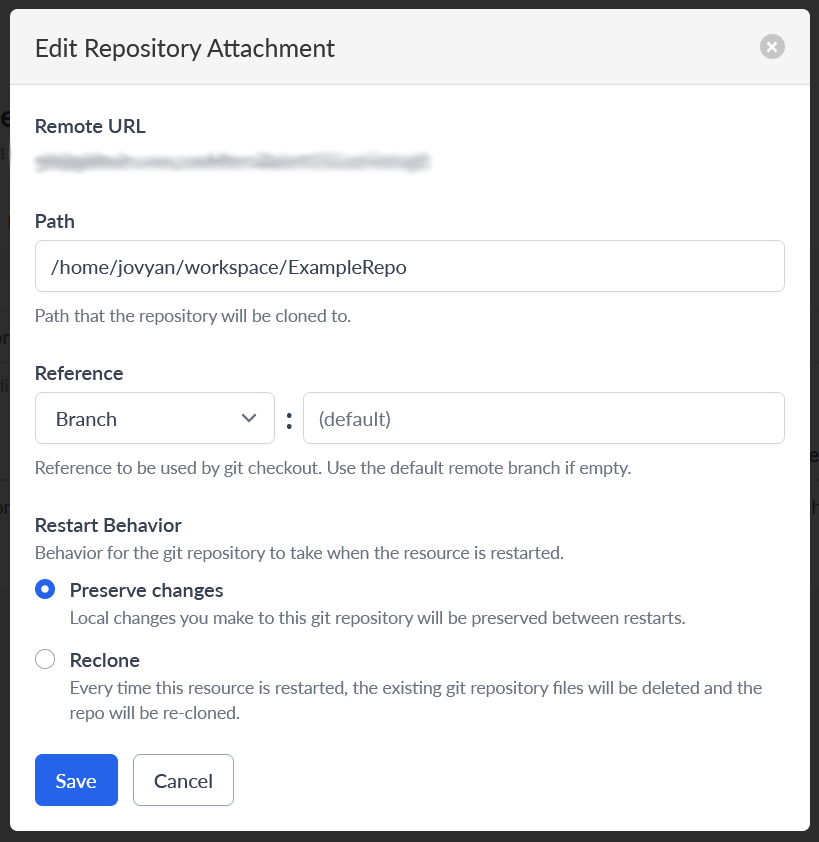 Now, when you log in to your Jupyter server, at the top level of your file system the folder git-repos will contain all the repositories attached to this resource.

If a git repository is removed from a resource via the UI then you will need to manually delete the folder within a Jupyter or RStudio server.

Using git in within your Jupyter Server

To do git commands within Jupyter Server like pushing, pulling, and committing, you can use one of two methods: either from the command line or by using the GUI provided by a JupyterLab plugin:

You can open a terminal window from within the Jupyter server and use git from the command line. First open the launcher by pressing the “+” button:

Then select “terminal” to go to the command line of the resource:

Alternatively, you can also use the git functionality built into JupyterLab with a GUI, using the plugin on the left of the screen:

When using RStudio you can use the RStudio built in git functionality, which defaults to a tab in the upper right hand corner of the IDE. You can also use the terminal to directly run git commands, using the terminal tab in the lower left hand corder of the screen. 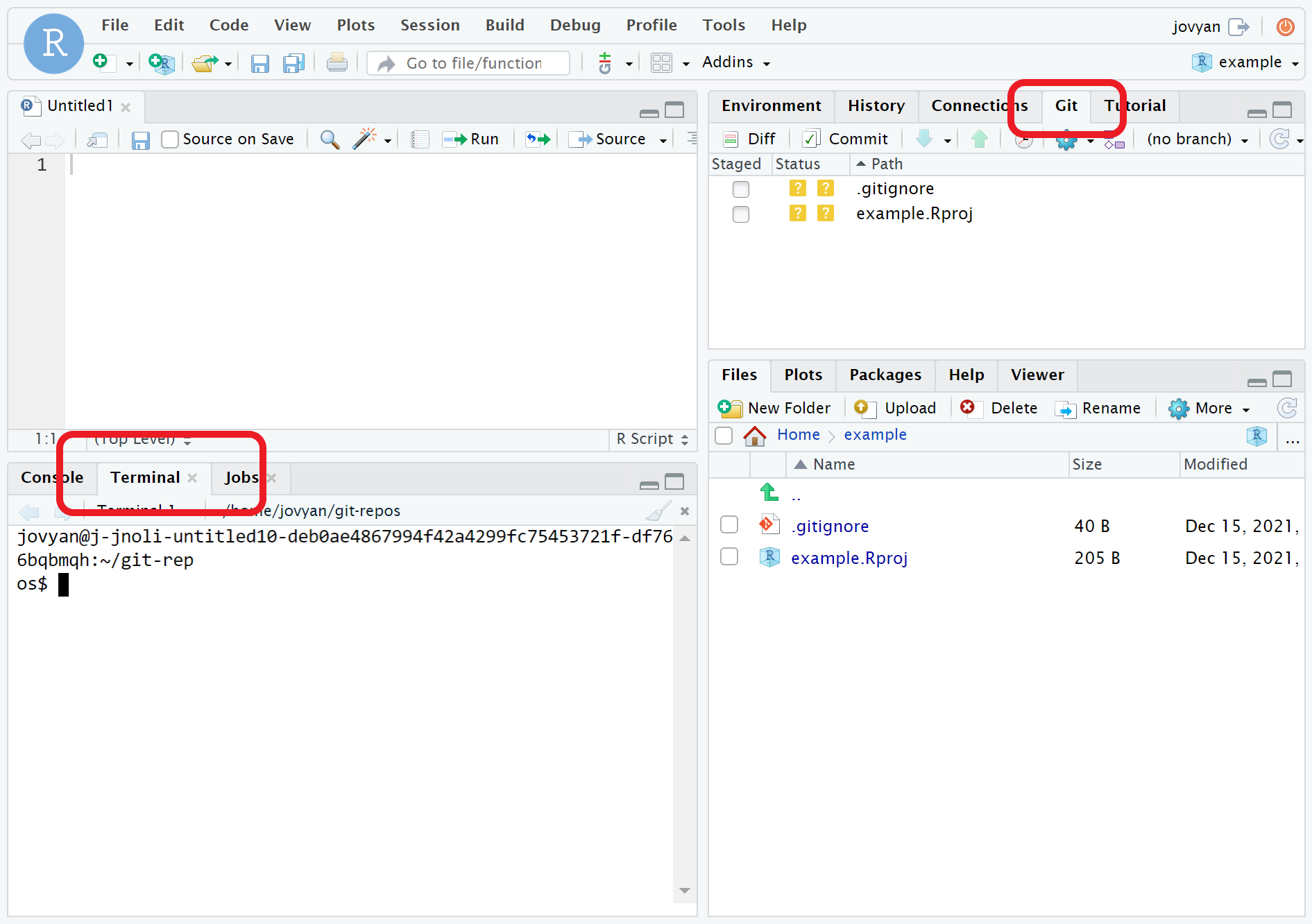