Dask DataFrames are amazing for interactively exploring large datasets. However, using them on big datasets can be a little tricky. You’ve probably already hit a KilledWorker exception trying to do a GroupBy. If you haven’t, you will soon!

The goal of this article is to arm you with a set of options to try if your GroupBy fails. First, we’ll take a deep dive into how DataFrame GroupBy Aggregations are implemented. This is necessary to understand how to work around any obstacles you stumble upon.

Dask GroupBy aggregations1 use the apply_concat_apply() method, which applies 3 functions, a chunk(), combine() and an aggregate() function to a dask.DataFrame. This is a very powerful paradigm because it enables you to build your own custom aggregations by supplying these functions. We will be referring to these functions in the example.

In this example, we’ll walk through a Dask GroupBy with default parameters to show how the algorithm works. We’re using a dummy dataset that has been split into 4 partitions. We’ve chosen numerical values for score to have separate decimal places to make it obvious when data is being aggregated.

This example applies the following transformation:

The Dask GroupBy Aggregation breaks the algorithm into chunk(), combine() and aggregate() steps. In this case (the simplest one), we only use the chunk() and aggregate() steps. This particular aggregation is elegant in that each of these steps is implemented in the same way, by grouping by the animal and summing the score (df.groupby('animal')['zscore'].sum()). By summing the partitions and then summing those sums, we can compute the desired result. Other algorithms like var() require different operations at the different stages. This diagram lays out the relevant operations, and shows us what the data looks like every step of the way. 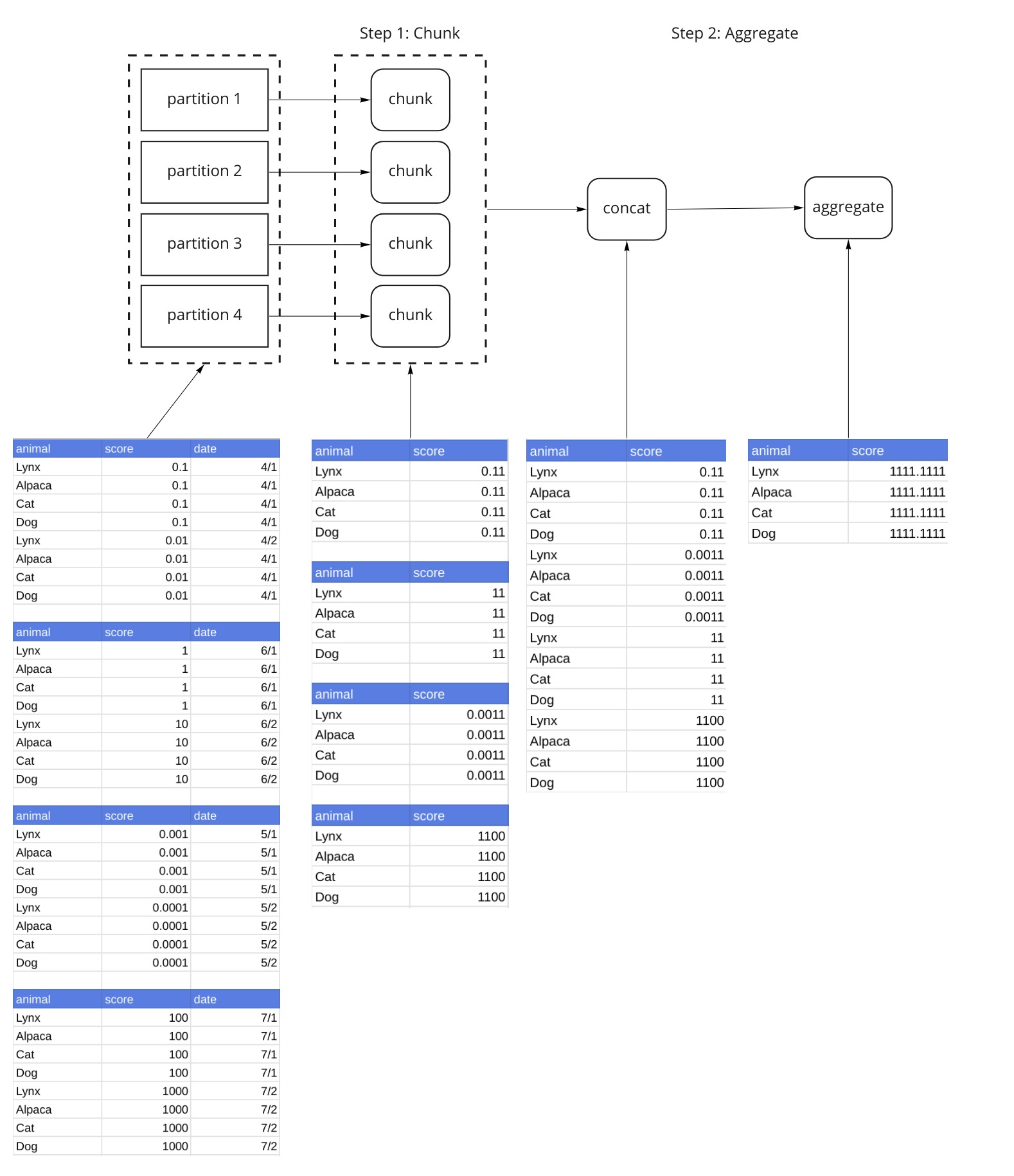 Our sample dataset has been split up into 4 partitions. Step 1 applies the chunk() function to each partition. This is an important step because its output is a reduction, and is much smaller than the original partition. Step 2 concatenates the outputs of Step 1 into a single dataframe, and then applies the aggregate() function to the result.

Dask provides 2 parameters, split_out and split_every to control the data flow. split_out controls the number of partitions that are generated. If we set split_out=4, the group by will result in 4 partitions, instead of 1. We’ll get to split_every later. Let’s redo the previous example with split_out=4. 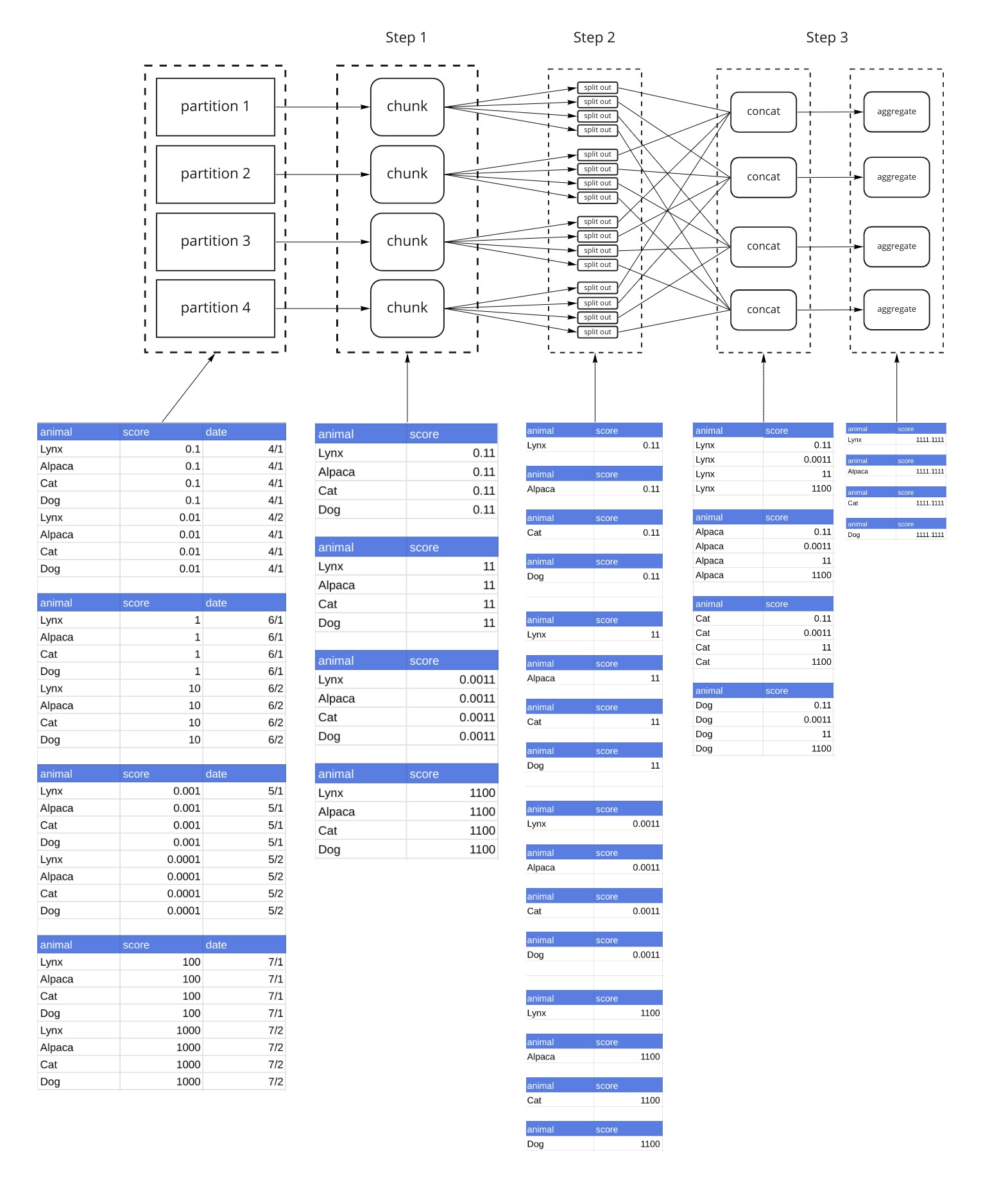 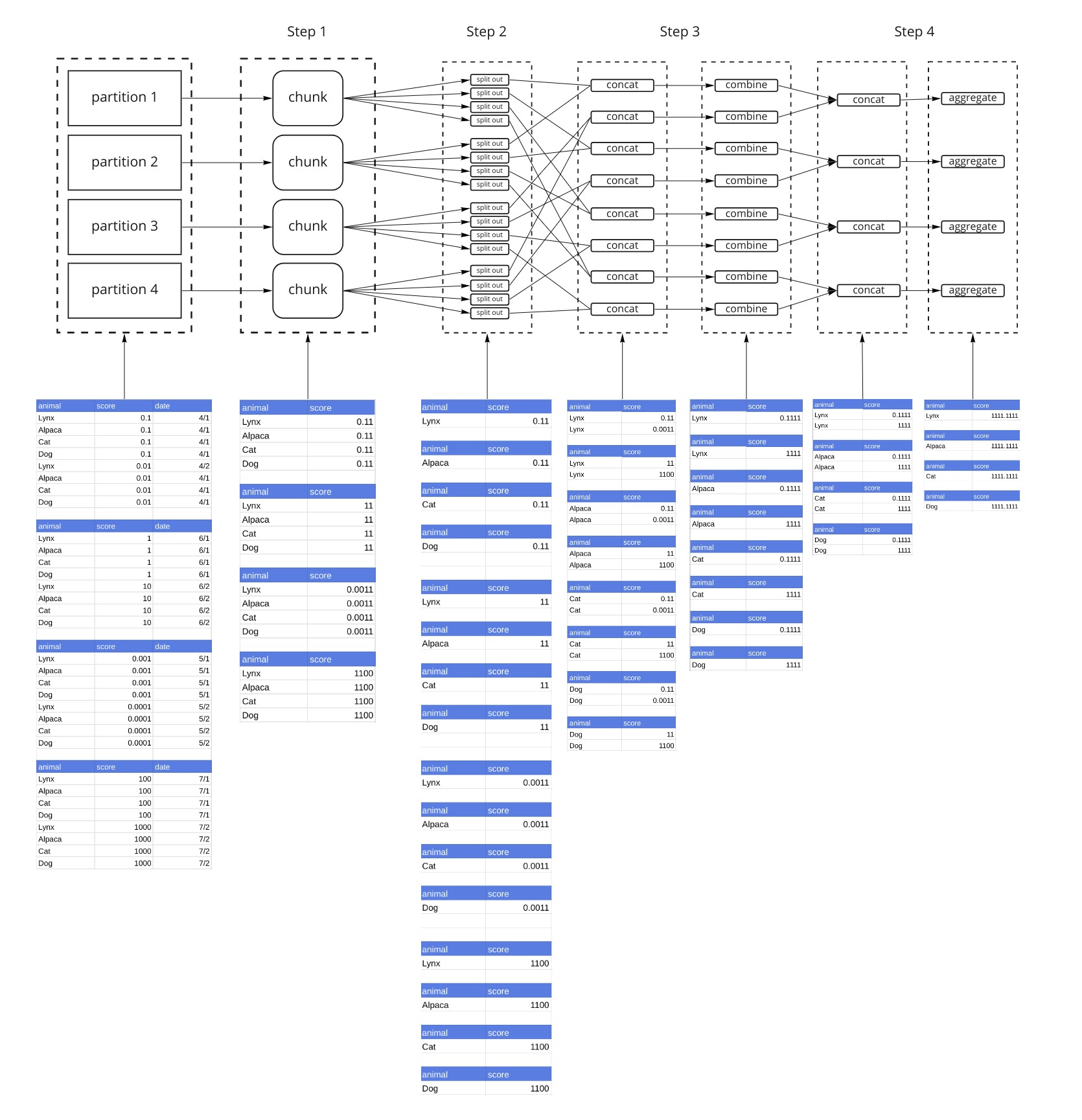 What Do We Do About It

The split_out parameter can be passed into the aggregation function.

This section is going to be a bit approximate and hand-wavy. Ultimately you’re going to need to experiment with your dataset and figure out what parameters work. This section may provide you with some guidance on how to think about it.

How many groups am I going to have? Hopefully you understand your data well enough to get a rough estimate for the number of groups that will be in your result. If not, you may need to compute it somehow. So for example, I have a dataset with 50 million animals. I take a subset of the data, execute the computation, and observe that my result has 5 million animals and takes 500 mb in memory. 5 million animals is 1/10th of the 50 million I have in the dataset, so my final result will be roughly 5GB.

Partition sizing is a different topic that won’t be covered here. In general you should size your partitions so that many partitions can fit on a worker but ideal partition sizes depend on how much memory your workers have.

Let’s say I have 8GB workers. If my final result is 5GB, I could set split_out to be 5, so that each 1GB result fits comfortably on the worker. However, the default split_every parameter is set to 8. If every partition is 1GB, in the worst case I could be concatenating 8GB - which would blow out my 8GB worker. Instead, I select split_out to be 25 so that each partition is 200MB.

Reality won’t be this precise. Exact memory usage is going to depend on how your data is laid out between different machines, and how much memory is used in the actual pandas computation itself. If your data is sorted according to your groupby column, your memory usage will be close to ideal. If you have data from every group on every machine, your memory usage will be closer to the worst case scenario. But this approach can serve as a rough guidelines to choosing split_out .

I don’t recommend tuning split_every. It’s much easier to tune a single parameter, and the default value of 8 is similar to how much extra memory head room you would want in your Dask workers.

Using map_partitions() is only a good strategy if your data is already sorted by one of the fields you wish to group by. In this example dataset, if my data is already sorted by animal, and I know that all cats are in one partition, and all dogs are in another partition, then I know that I don’t need data from other partitions in order to compute statistics about each animal. This means I can replace

Don’t use GroupBy and then Apply

map_partition is how a Dask GroupBy with an Apply is implemented when the data is already sorted. This means I could write my aggregation as

Dask does a lot in order to implement GroupBy aggregations on a cluster. In most cases, it works really well out of the box. When it doesn’t, you can tune split_out to make Dask produce smaller chunks. If your data is already sorted, you can implement the operation more efficiently with map_partitions(). The actual algorithm can be a bit tricky to understand, but understanding it can help you gain intuition about how to tune the parameters.