Speeding up Neural Network Training With Multiple GPUs and Dask

By combining Dask and PyTorch you can easily speed up training a model across a cluster of GPUs. But how much of a benefit does that bring? This blog post finds out!
By Jacqueline Nolis | Thursday, August 19, 2021 | Data Science & ML 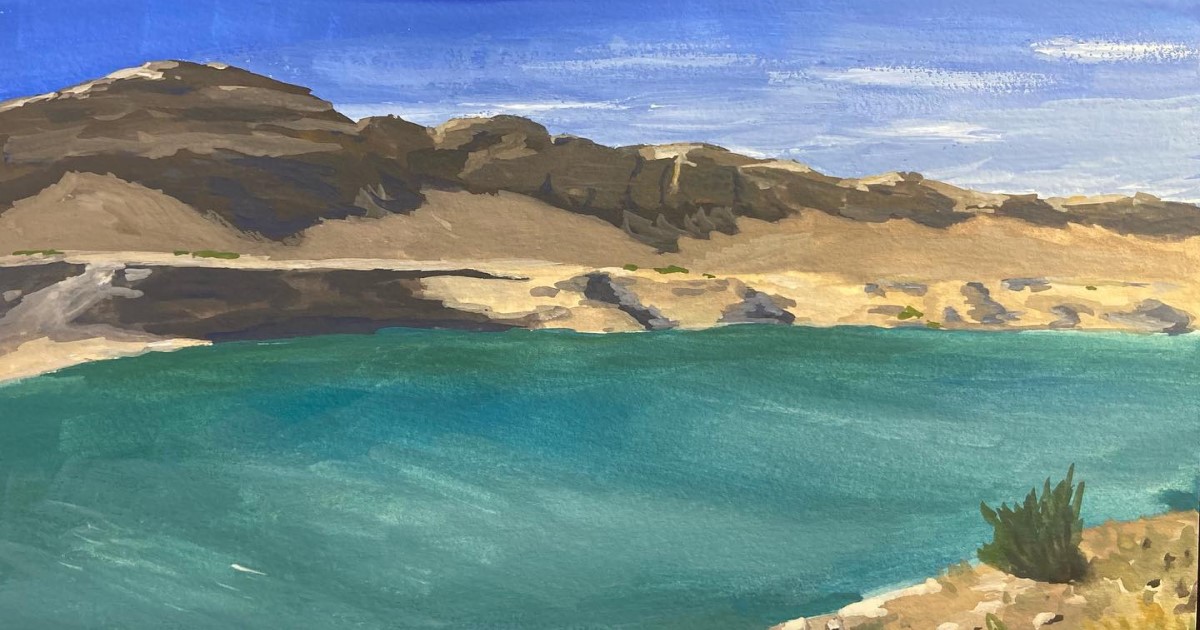 One option is to connect multiple GPUs together across multiple machines so they can work as a unit and train a model more quickly. For most of the time, I’ve been using neural networks with the idea that connecting GPUs seemed outrageously difficult and maybe even only feasible for engineering teams trying to show off training large models. Thankfully, it turns out multi-GPU model training across multiple machines is pretty easy with Dask. This blog post is about my first experiment in using multiple GPUs with Dask and the results.

To see how to use Dask with GPUs to more quickly train a model, I first needed a model to try training. I decided to lean on my old friend, a neural network trained on Seattle pet license data, to generate realistic sounding pet names. I had previously used this neural network as an example in R, so switching it to Python and Dask seemed fun. I decided to use PyTorch for the framework, but still with a multi-layer LSTM to capture the patterns in the words.

This whole blog post can be run for free on the Saturn Cloud Hosted free tier using the free Jupyter server and Dask clusters.

To train a neural network to generate realistic text, I needed the data to be properly formatted. Specifically, I want to predict each character in a name (as opposed to word in a sentence), so the base data was the beginning sequences of characters in text and the target data was next letter in the sequence of text. For example, to train a model on the pet name “SPOT” I would need to train it that a first letter is “S”, after “S” is “P,” after “SP”, is “O”, and so on. I used blanks used as filler and a special stop character indicate the name was complete. This was be made into a matrix as shown below (and if the data is too long I’d just truncate the earlier letters):

(Full code for the final model can be found on this Saturn Cloud GitHub repo.)

The basic idea to train with multiple GPUs is to use PyTorch’s Distributed Data Parallel (DDP) function. DDP will let multiple models being trained at the same time pass parameters between each other after each batch and compute the gradient concurrently. Thus, if you have three devices training a model with DDP, it’s equivalent to training a single model with a batch size that’s three times as large. Since the devices are all training concurrently, it’s theoretically possible that in this scenario, the model could be trained 3x faster than a model on a single device with a batch size 3x larger. In practice, this won’t be the case because of latency between the models when they communicate. But still, the results can be pretty good.

To turn my training code into a multi-GPU set up, I needed to make a few adjustments. First, I needed to add the PyTorch DDP wrapper around the model in the training future (and again the full code is available on GitHub):

Next, any place in my training function where I might only want a single machine to do something (like write the output at the end of an Epoch), I needed to wrap in a “only have one worker do this” logical statement. I used worker number 0 as the one to run these commands.

Finally, to log the model results rather than having to coordinate where results are being saved within the Dask cluster, I used Weights and Biases as a place to store results and models.

For the analysis, I decided to try adjusting a number of parameters and see how a version with multiple-GPUs compared to a single GPU. Note that for simplicity in comparing, in the single GPU case I still used the DDP-based code but only with one machine (rather than removing that entirely)

Then, I used a Saturn Cloud Dask cluster to iterate though each of the combinations. Note that you have to be careful when comparing the results of the different experiments. For an equivalent comparison, if the number of networked GPUs went up by 4x you need to lower the training size per GPU to 1/4th the value. I, uh, may have spent hours trying to figure out what was wrong before I realized my comparisons weren’t equivalent. With that, here are the results: 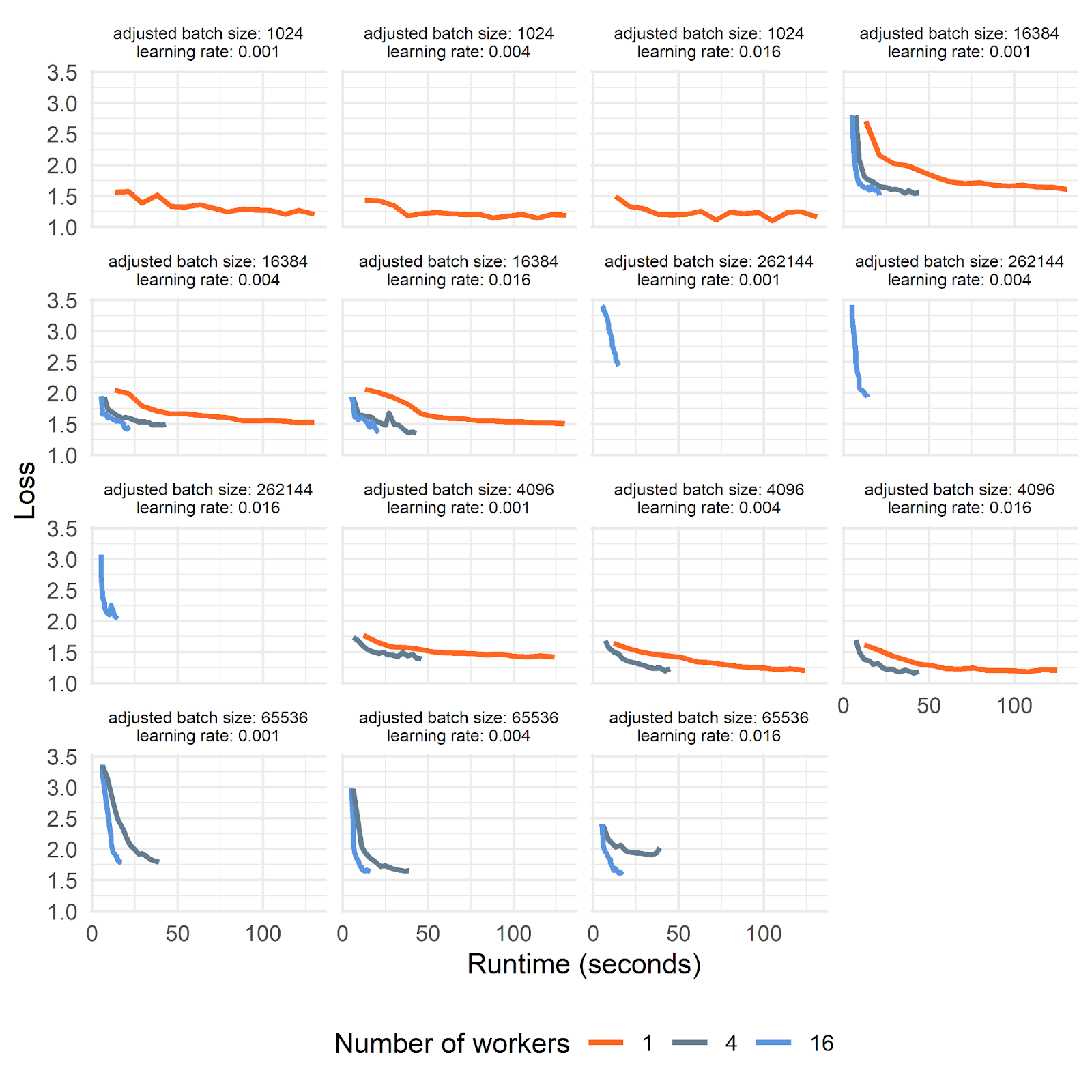 As you can see, using more GPUs can dramatically reduce the amount of time it takes to train the model, while still providing the same quality of model accuracy.

Here is a graph of the same data visualized in a different way–instead of showing the curves over the epochs of the training run, this is the amount of time it takes before the model hits a reasonable level of accuracy. You can see that increasing the number of GPUs by 4x can give you a nearly 4x increase in speed. 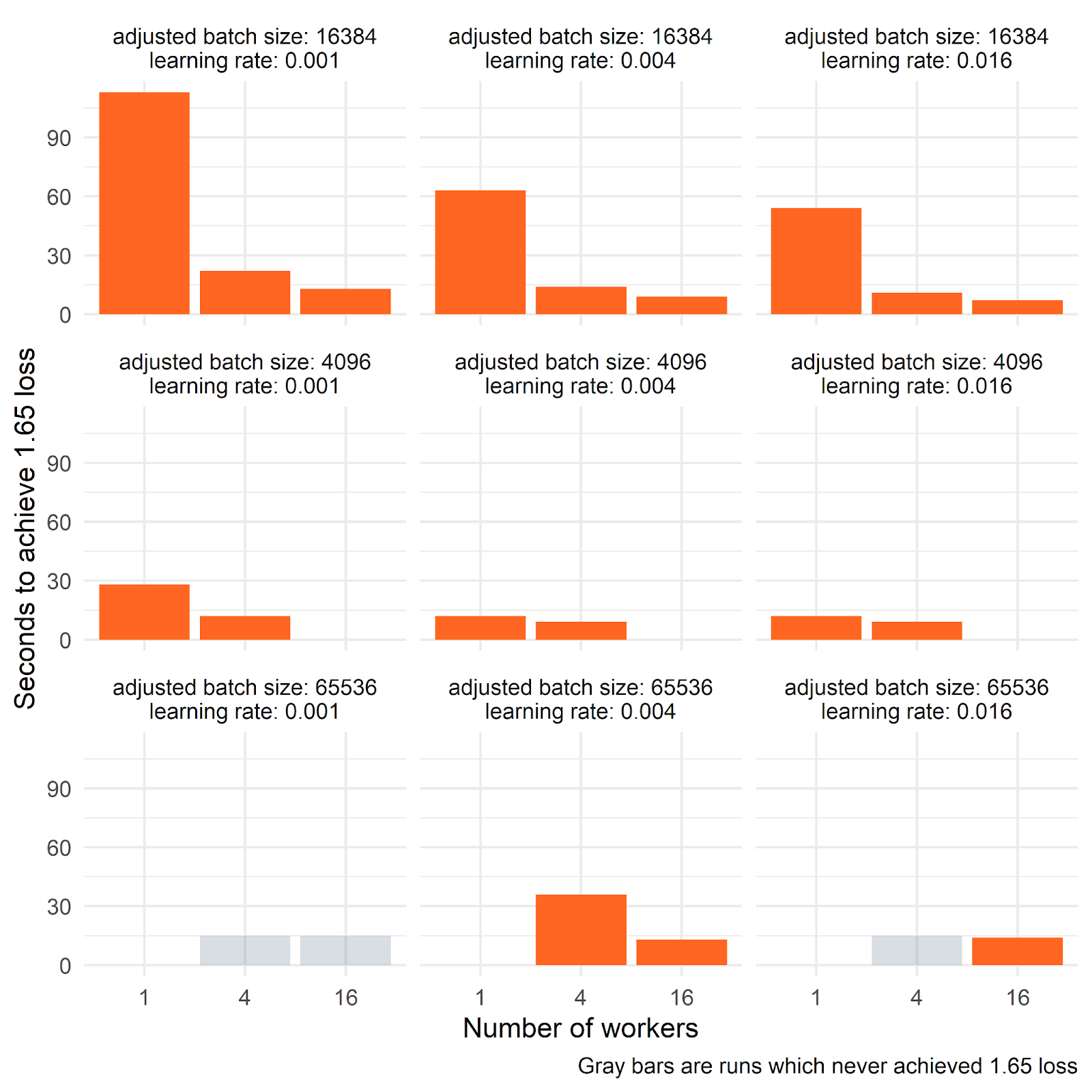 A few notes about these pretty amazing results. First, these techniques work best when your models need larger batch sizes because at that point. multiple GPUs aren’t just speeding up your results, but also you can avoid out of memory errors. So, if your problem is sufficiently simple, you might not get as much value out of using multiple GPUs, although there should still be a speed increase. Although, if the time it takes for your GPUs to communicate is high, then that can reduce the value of this too. Additionally, besides having multiple machines all coordinating GPU model training, one other option you have is to train with multiple GPUs on the same machine with resources like V100 graphics cards. That can be done using only DDP–having Dask communicate locally could still work, but would probably be redundant.

Besides using multiple GPUs with Dask to train the same model in a coordinated way, you could use Dask to concurrently train models with different sets of parameters. This allows you to explore a parameter space much faster–you could go faster still with tools like Dask-ML for fast hyper-parameter tuning.

Lastly, just to see the fruits of all this labor, below is a set of pet names the model generated (and you can generate them yourself here).