Choosing Machines for your Work

How to decide what size of machines you need for a task, and if you should use Dask

In most situations, when we begin a machine learning project, we have little or no choice in the computing resources available to us. How big is your laptop? That’s the size of resources you get.

However, when you use Saturn Cloud for your data science, you actually have the freedom to choose from many computing specifications! This creates a challenge - how do you know which machine or set of machines is what you need?

The first thing to remember is Don’t Panic. When you use Saturn Cloud, changing your machine size is as easy as changing your mind, and takes only a few clicks.

One Machine, or Many?

Think about the work you have in front of you, and ask yourself a few questions.

These questions, if answered Yes, might mean that you want more than one machine. Using Dask makes parallelizing code easy, so taking code that’s run on one machine to a cluster is not difficult. Take a look at our documentation about Dask and setting up a cluster if you want to go this route.

If you choose multiple machines, your cluster setup will look something like this: 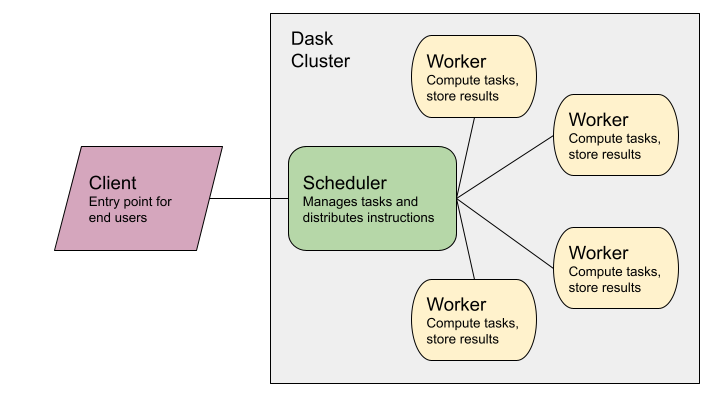 If you answered No, or I’m not sure, then you may want to start with just one machine (the Client), at least for now.

Either way, you still have more choices to make.

Do you need a GPU for your computation? How would you know?

A GPU is best suited to tasks that can be very parallelized. Meaning, if you need to do a small task in about the same way dozens or hundreds of times, then a GPU might be useful. But if your tasks are complex in other ways that don’t necessarily lend themselves to parallelism, a CPU might be better.

GPUs are really good for certain things (hyperparameter tuning, or ensemble models, for example) but are not always the right option. A GPU has less immediate access to memory caches, and it isn’t supported by nearly as many programming libraries and frameworks. Many times, a task would be faster and also easier to run on a CPU.

So, think about your task, and decide what kind of machine you need. Remember, you can always change your mind! But changing your mind between CPU and GPU may require some refactoring of your code later.

Now you’re ready to look at the sizes of machine (cores and RAM) available! Saturn Cloud makes a wide range of machines available to users, and you can find a list just by running this in your Jupyter server:

Let’s look at one example, the g4dn4xlarge or T4 XLarge GPU machine. Amazon gives us lots of details about the EC2 instances, so we can research to see what this machine contains.

This gives us some information. First, if you don’t need a GPU, this machine is probably not that useful for you. It would cost more than the equivalent XLarge that doesn’t have the GPU, and otherwise has the same parameters.

Second, it will hold up to 16 GB of data in memory for you at any given time. Decide if that’s big enough for what you’re up to- remember that’s the absolute most it’ll hold.

Third, because it’s a T4, it has a slightly older NVIDIA GPU than the cutting edge found in P4 machines (the A100 Tensor Core GPU). This might be fine for you, but be aware that there are faster and more sophisticated GPUs available too.

Beyond that, if you think the machine might do the trick, try it! If it’s too slow, you can bump up. If it’s too costly, or more resources than you require, you can scale back.

If you find that the choice you’ve made is either too much, or not enough, you can adjust in a few ways.

As your work evolves, you might find that a cluster makes sense now, when it didn’t before. In Saturn Cloud, you can add that cluster very simply, use it when you need it, and continue with your work.